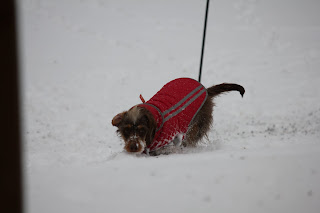 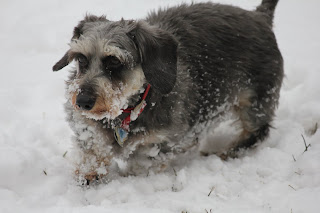 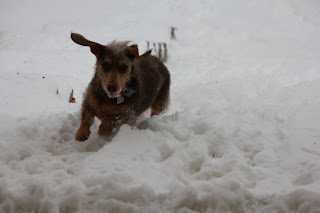 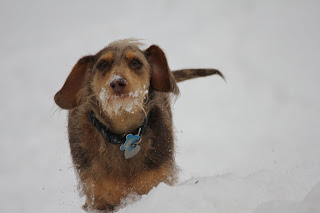 Oscar at top.
Fritz 2nd one
Bruno the bottom 2
Am gonna ramble for a while...
1. My last posting was about the start of the snow. Let me tell you that we had about 4 inches. I have about 250 photos of the snow days - or daze. When we awoke that morning, snow was everywhere. It took 3 days before I could get the Marauder out of the driveway. Keep in mind that North Texas went below freezing on Tues and stayed in the teens and 20s for about 4 days. Sure, the guys up north think this is a lark, but we don't down in Texas.
Dallas area had the snow on Tuesday, and we saw none. Then it came here from south of us...across the southern part of the state & up into our arms. Cheeeeee
My dogs (uh, the boy dogs) loved it. They were out running. The two girls went out and tolerated the white.
2. after 3 days of 20 degree weather, I went out and started my little Ford Explorer. It took a bit more cranking than normal. (This was before the snow) I started backing up the driveway and the car died. I drove it to the mailbox (about 2 mile round trip), everytime I lifted my foot off the gas - died. In my youth, we'd lift the hood and adjust the idle screw. Not anymore. One foot on the brake; one foot on the gas. Parked that rascal in front of the house on the hill, not in the driveway. Then I worried. My theory was that something (like a roller) was frozen and would not let the belt turn properly, pulling down the engine.
Bottom line: after the snow and it was 50 degrees out, car started and ran fine. Unworried.
3. We have several bird feeders and squirrel feeders out back. In this weather, flocks of birds zoom in on our estate. Little yellow birds & big honkin' black birds. They ate and ate. The squirrels enjoyed their treats too, often times they tried to steal the sunflower seeds from the birds. Open the back door and let the dogs out.
The boys fly out of the house after the squirrels. They have never gotten closer than 5 - 7 ft, but they still try. The squirrels scramble up the oaks staring down the boys, who, if left alone, will gobble up any bird food or corn on the ground. Someday I will be able to get a photo of them launching off the back porch towards the feeders. They truly fly.
4. The snow has gone. The backyard is mud. The boy's toes are mud. Our kitchen has bits of mud, discarded by unconcerned pups.
5. enough of the snow for now. It has taken its toll on this household - cabin fever. I will end with something from the paper way back when. (Keep in mind that I do support the Republicans and their efforts at most things.) The Williamson county republicans were sorta called on the carpet because they had listed certain items with Texas Ethics Commission as expenses. They showed an expense of $5,272,010 at Round Rock Donuts on Sept 20th and $9,082,010 at Applebee's restaurant in Georgetown on Sept 8.
Y'know folks, no matter how great those Round Rock doughnuts are - and I can tell you from personal experience, they be tasty - $5 mil for donuts on one day, that seems somewhat excessive. And, while an expensive place to eat lunch for me, $9 mil at Applebees is a long way from hamburgers all the way around....at $9 mil, me thinks they could feed all of Williamson County a burger....with cheese.
Have you figured it out yet? It seems some yahoo entered the dates in the wrong slots: so, Sept 8 became 9082010 or 9/08/2010. They actually only spent $13.99 on donuts.
An aside here: Round Rock Donuts are made with a yellow flour. The donuts, when bitten, have a yellow inside. . . sorta pretty if you think about it. They are good.
I stop now and take the kids to the dog pit for our last adventure of the night. I am sure it will be fun for all. Fritz is the most willing to go out. He knows, yes, he knows. When we return to the house, he will get a cookie. Yum.
Sign me,
Mike, M3, Mtz, Papa, Hey You!!!

Email ThisBlogThis!Share to TwitterShare to FacebookShare to Pinterest
Labels: Ramblings