Mystery of the green spots

If you read this at all, you know I have 5 wirehair dachshunds. Greta, Fritz, Liesl, Oscar, and Bruno.  In order:  blond (wheaten), black (black & tan), white (white + various spots - dapple), chocolate, and chocolate dapple.  As varied as their colors so goes their personalities and quirks.
--
Big G, Greta, blondie is the smallest and the oldest.  She is a doll who has her own way about anything & everything.  She is afraid of nothing, well, except a roll upped newspaper.  She goes to bed early and will sleep past 8 a.m., nearly 3 hours after the others have rolled out to beg for breakfast.   Generally she eats every other day.  Food has minor interest to her.  Still she has grown to 12 lbs.  The diet has started.
--
We left the house the other day and isolated the dogs while away.  It was lunch time when we returned.  All dogs came into the house, the kitchen to be more specific.  My wife was preparing some delicious lunch for me.  Greta walked across the kitchen, picked up her empty food dish and threw it as best she can.   I can take a hint.
--
Greta did not want to eat breakfast that morning.  Popping her dish meant something to her and to us.  She did it again.  Fritz sat close watching and hoping.  Nothing makes Fritz happier than a bit of spilt food (and before you say it:  Spilt is a word.  I don't care what any book says or the spell check on this machine - spilt is a word !!)  Spilt food is good.
--
I dumped a half cup of dry Iams in her dish and she ate.  Important fact....the food dish is right beside a water dish.  She finished.  I picked up the dish.  We ate lunch.  Fritz was sad that she didn't SPILT anything.
--
Lunch over and the wife is cleaning up a bit.  She said, "What are these green spots on the floor?" There was a string of green 1/2 inch spots making a curved line across the kitchen floor starting near the water dish.   We looked and studied,  Green spots.  The wife said something about them starting where Greta was eating.  I joked maybe she was bleeding green blood.  Not funny.
----
So I picked the fuzzball up.  The pad of her left front paw was green.  We took a wet towel and washed the pad.  Green just kept coming off....The mystery:  what did she get into that left something green on her foot.  When she ate, the paw hit water activating the green dye.  It must be a grandular something that she stepped into and it stuck between the toes.
---
The lovely spouse and I have searched the house over, the garage over, the back porch over -- nowhere is there anything that produces green dye.  It looks a bit like the color of that green fertilizer that puts out nitrogen for small plants.   Can't find any of that messed up.    Where did the green dye come from?  She won't tell - prolly afraid of the roll upped newspaper.   I am open to suggestions.
--
as I type, Greta is asleep on a pillow by my toes.  She just had a dream and moaned her way through it.  She is such a dear and the diet has begun.
Think little green spots.
out
mtz 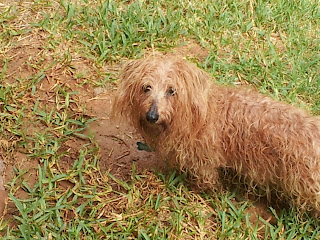 Posted by Mike Metze at 9:30 PM No comments:

Email ThisBlogThis!Share to TwitterShare to FacebookShare to Pinterest
Labels: Life in the country 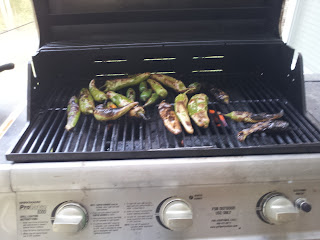 History:
Roger called last week before heading to Cisco to meet us and pick up his girls from Grammy Camp. United Food in Lubbock had fresh Hatch Chile Peppers for $1.28 lb - and they were selling them cooked (or raw) - apparently cooking them on the grill at the store. I had Roger pick me up a bunch of cooked and 3 lbs of uncooked (raw).
-------------------------
Got home with the cooked ones and peeled off the skins - freezing the critters in smaller bags. The wife cooked beans this week and make corn bread muffins with Hatch Chiles in them.   That was pretty good.    She found a "green chile" beef stew recipe that was pretty yummy too. . . . . even though I think we both like our pork green chile stew a bit more.
-------------------------
Went to our HEB grocery store Tuesday - there were Hatch Peppers. Now remember the $1.28 above - when Roger was at his store and learned the price - telling me over the phone, I made the comment that $1.28 seemed to be pretty cheap. We didn't have any bigger peppers in Corsicana for anywhere near that price. The Lubbock store guy made a comment about having to pay shipping to get peppers to Corsicana.
------------------------
Our local store calls these Hatch Peppers - but my grocery receipt says Anaheim Peppers. Nevermind. Locally, our HEB price is 97 cents a lb. Now THAT is a bargain. Our Jalapenos are 68 cents a pound. That is a bigger bargain. I bought a couple pounds of the Hatch peppers.
------------------------
Tonight, I fired up the outside grill - I cooked my peppers - made about 3 bags full - into the freezer. Might just buy a few more tomorrow if the prices have held.
That's it.  Keep the faith (whoever she is).
Posted by Mike Metze at 11:21 PM No comments:

Email ThisBlogThis!Share to TwitterShare to FacebookShare to Pinterest
Labels: Recipes and Food

Posted by Mike Metze at 2:45 PM No comments:

Email ThisBlogThis!Share to TwitterShare to FacebookShare to Pinterest
Labels: Ramblings

This week is Grammy Camp week.  The 3 g-girls are here and we are doing stuff.  I know that I wrote more last year about G.C. - somehow this year's adventures  don't call for as much typing.  Yesterday we stopped at a Braums Ice Cream - today:  Cici's pizza, Slushies and a couple of hot hours at the  local swimming pool.  Last day of camp will be Saturday.  I think they are having a good time.  What do I know?
====================
Relaxing on the couch (divan) watching the Olympics.   My little boy Oscar prances up and tells me that I need to hold him.  I  picked him up and laid him on my stomach with his head resting on my chest - eyes closed, starting to sleep.   He cradled into my left elbow with the long dachshund nose directly below my nose.
He closed his eyes;  I pet his side.  His head popped up & he looked me in the eye.  He turned the nose slightly and blew it out - exhaled loudly if you will.   Then re-looking me in the eye he planted his head on my shoulder, nose away from my chess.
Now I ask.   If I am breathing on the nose of a dog and he exhales, moving his nose away from yours - HOW BAD DOES MY BREATH SMELL?  I mean, if a dog is offended by my breath, how bad can it be?  First chance I had, I used some sin-sin, a clove, and gargled a jug of listerine.    poor dog.
==========================
A final note - TODAY - how LONG has it been? -  I caught a mouse in the garage.  Dead;  thrown out; re-baited.